William D Drake is a musician, pianist, keyboardist, composer and singer-songwriter. A former member of influential cult band Cardiacs, he has gone on to release two albums with Cardiacs off-shoot Sea Nymphs and a further five albums under his own name; “William D Drake’, ‘Briny Hooves’, ‘Yew’s Paw’, ‘The Rising of the Lights’ and ‘Revere Reach” … a sixth album is slowly taking shape.

His other musical enterprises include performing in an experimental adaption of the opera ‘Poppea’ at Theatre du Châtelet, Paris, alongside Marc Almond and Karl Barat (Libertines). He guested with North Sea Radio Orchestra and John Greaves, in performances of Robert Wyatt’s ‘Rock Bottom’ album in its entirety, at two arts festivals in France. 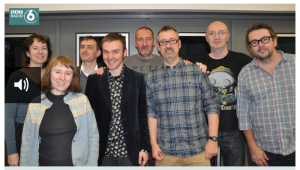 “Oh, absolutely nothing short of fabulous, as I knew it would be; William D Drake live in session.”……”Impossible to listen to without a big smile on my face.”….”When I heard the album I was just completely blown away by it, because it just doesn’t sound like anything else…pretty damn individual and wonderful.” …..”I can do nothing other than just applaud you, quite literally, that was just amazing, absolutely joyous I would call it. I tell you, that I can guarantee, that will be in the Best Sessions of the Year Programme…Nothing short of marvellous.”

Anyone who cares about proper songwriting should take a look at what he’s come up with. Adventures in harmony and melody are rare these days; his arrangements glisten with bowed saw, dulcitone, choral vocals, classy clarinets… This is Drake’s fifth solo album, and it’s possibly his finest… heartfelt and memorable… an accomplished and blatently enjoyable set.

Delicious off radar folk…. this fifth effort is an enthralling exercise in stately prog-folk, drawing on a love of sea shanties, centuries old poetry and chamber music…

Bill Drake’s albums are always a delight, deliciously eccentric and very English, his delicate vignettes spiced to perfection, and for me, this is the perfect feast, a beautiful and largely acoustic album of the wonderfully unexpected that makes me smile each and every time. It takes Cardiacs as a starting point but is much gentler, the pointy edges filed down to a sophisticated jab rather than a blood-curdling stab. It’s mad as a bucket of badgers and all the better for it, willfully obtuse with a cheery wave and a glint in its eye, led by Bill’s formidable piano talents. Just wonderful, and long may Mr Drake continue to plough his idiosyncratic furrows of magic.